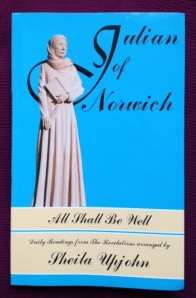 I bought this translation while I was in Norwich last summer. It is published by the Friends of Julian, has a forward by Robert Llewelyn, and is translated by Sheila Upjohn. It is arranged as daily readings, with most chapters set out over two or three days. I really wanted to like this translation very much, but in the end was a bit disappointed by it.

My first experience of Julian’s writing was the small Enfolded in Love book, and I have always loved the way the words flowed. For a long time I didn’t realise that it was Sheila Upjohn who had done the translation, I was more aware of the fact that Robert Llewelyn had been the editor of that and the other books in the series. When I found out that there was a longer translation available I was excited to read it, and I must say that the translation itself is wonderful, but there are other things which don’t work for me.

First of all, this is not a complete translation. Most of the text is here, but it is not all here, and unfortunately for me, some of my favourite passages have been omitted, so as I read I was very aware that some things were missing.

Like the Grace Warrack translation, this is quite a sparse version, with no footnotes and no headings. The chapter numbers are printed at the bottom of the page, but that is all. I usually read two chapters of Julian every evening, and so this format didn’t really work for me, I suppose because I was not using it in the way it was intended.

In the end I had very mixed feelings about this book, but in large part I think this is due to the way I read Julian and the structure of the book being incompatible. The translation is wonderful, and if you are looking for a structured text for daily meditation, maybe a step on from Enfolded in Love, then this might be the translation for you. However, if you are familiar with the full text then this will seem a little lacking, and if you read it in any way other than the one for which it was intended then it will feel a little disjointed. 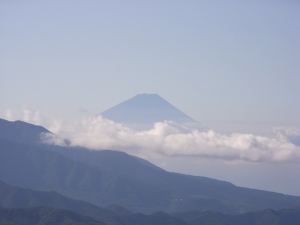 In September 1985 I came to Asia for the first time. I arrived in Shanghai towards the end of a sticky summer, just in time for the Mid-Autumn Festival. Shanghai has changed a lot since then; I’ve changed a lot.

By the time the following February rolled around, and the university gave us time off over Spring Festival (Chinese New Year), I knew exactly where I wanted to go: Tibet. Specifically, I wanted to get there before I turned twenty, for some reason I’ve long forgotten, if indeed I ever had one. It may have been an arbitrary challenge to myself. I’ve always thought bloodymindedness to be an underrated virtue.

Having hung around in Chengdu for a few days over Spring Festival (and shared my hotel room with a rat) I flew to Lhasa, and from the airport outside the city we were put on a bus into Lhasa itself. I remember waking up just as the bus stopped, and looking up at the Potala Palace towering over us against a bright blue sky.

At the time, the Holiday Inn was being built, and there were only two hotels where tourists stayed; the Banok Shol and Snowlands. I stayed at Snowlands for a week. I hired a bicycle and went out to Sera and Drepung monasteries, climbed up the steps to the Potala Palace, ate fresh yogurt made from yak milk delivered to the hotel courtyard every morning, met the great-neice of composer Ralph Vaughan Williams, watched the sun set over fluttering prayer flags and sent triumphant postcards back to the UK. I’d made it, about ten days before my twentieth birthday.

At the airport waiting for the flight back to Chengdu, I met a North American woman and a South American man. They were Christians, of which denomination I don’t know. I don’t remember their names, but I can still see their faces. Waiting in line, the woman insisted I pray with her. More to humour her than with any great purpose, I went along with her prayer: Lord Jesus, if you’re real, come into my life. I returned to Shanghai, finished the school year and went back to the UK.

Over the summer I visited my godmother in East Anglia. Although growing up my family had been C & E (Christmas and Easter) Christians, (probably because my father was the headmaster of Church of England primary schools), we had stopped going, and although I can see now that my faith had stirred itself on several occasions, I had not been to church in years. Somehow my godmother recognised in me a need, a longing, I don’t know what, and while I was staying with them I went to church with them and she encouraged me to look for a church in Leeds when I went back to university in September.

I found a church; Wrangthorn, a huge, cavernous, dark building. I also started attending confirmation classes in the parish where I grew up, and on Advent Sunday in 1987 I was confirmed. I remember there were six of us, all women. That day we were all given a book, and this is where Julian found me. I received a copy of Enfolded In Love, a short, pocket-sized book, which I took with me to China when I went back after graduation. It came with me too, when I came to Japan for the first time in 1991.

Slowly, gently, Julian settled in my heart. Her most famous sentence, “All shall be well, and all shall be well, and all manner of thing shall be well,” gave me strength when life was difficult, and when I returned to the UK after two years I visited my godmother again. By then they had moved into Norwich and her son had designed a walking tour of the city as a school project. No one had done the tour, and I agreed to be his guinea pig, as long as he included a detour to St. Julian’s and the shrine on the site of Julian’s cell. That day I became a member of the Friends of Julian, and twenty years later I still am.

Through Julian I have gained so much. I have met inspiring people. I have read the full text of her Revelations Of Divine Love and found so much there which resonates in my soul. After twenty-five years, I want to find the words to explore what she means to me, and what she has shown me. How I have grown in faith and learnt how to pray. How Julian has sometimes reassured me and sometimes surprised me. How I have found connections through her that have changed my life.